The BBRS is a wholly independent organisation, both in its decision-making and its operations. It has been established to help Small and Medium sized business Enterprises (SMEs) who have not had access to other forms of resolution.

The organisation’s key goal is to resolve disputes fairly between businesses and banks; and to promote trust in business banking relationships. This goal will be achieved by adjudicating cases impartially, based on what is fair and reasonable, using mediation and Alternative Dispute Resolutions practices.

This is the third BBRS’ Quarterly Insights Report, providing information about our casework since our launch on 15 February 2021 through until 31 December 2021.

When the BBRS launched in February 2021, the number of cases was heavily weighted towards the historical scheme. This was due to the existing awareness of the BBRS among SME groups that were involved in the set-up of the BBRS.

The total number of cases registered with the BBRS. These figures do not consider eligibility or include duplicates.

The BBRS continues to see instances of inactivity from customers that result in deregistration, although this number is smaller than in previous reports, with most customers actively engaging in the process. Cases that are de-registered have not necessarily been the subject of a formal Eligibility Assessment, and these customers can re-register in the future if they wish to do so. Where  cases are de-registered, this only happens following sustained efforts to communicate with customers.

There are no open cases waiting for a Customer Champion to be allocated.

The BBRS continues to actively work with customers and banks on progressing cases in a timely manner.

The BBRS treats all cases as eligible until we have established the facts relating to each complaint. When a complaint is first assembled, information is collected to check eligibility.

As of 31 December 2021, 174 cases were progressing through the BBRS process and 451 cases had completed their journey, including those cases that have been deregistered.

The chart below is based on the total number of reasons that cases have been found ineligible for the BBRS through formal Eligibility Assessments and is based on the 57 cases that as of 31 December 2021, had been taken through, or were undergoing, a formal Eligibility Assessment. As some cases are still live, and could be subject to appeal, these totals may change in the future.

The second most common reason is that at the time the case was referred to the bank, the business appeared not to meet the required BBRS financial characteristics.

Please note that there can be one or more reasons affecting eligibility per case. As of 31 December 2021, 36% of ineligible cases had multiple reasons making them ineligible for consideration. 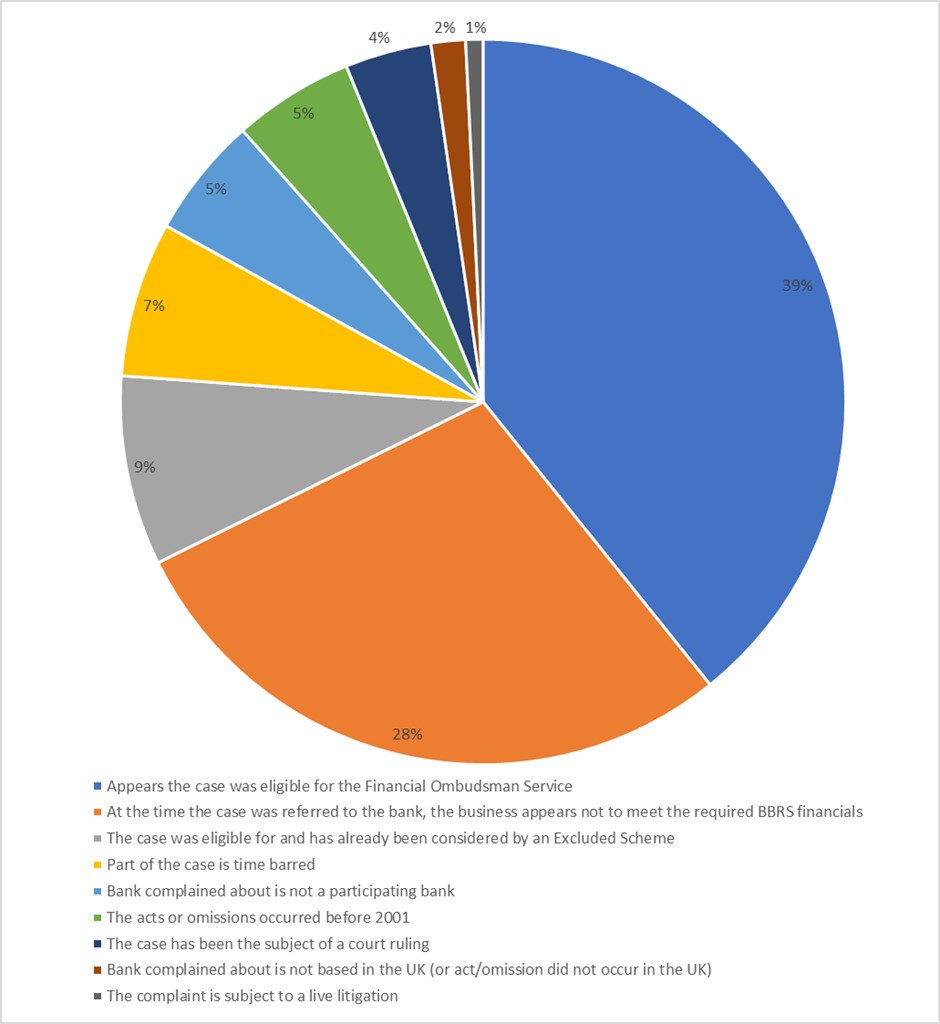 If a case falls outside the BBRS’ eligibility criteria, the BBRS may still be able to consider it provided that we, the customer and the bank all agree. If we are asked to consider a complaint and we believe we should be able to do so (for example because  there is a technical reason why it is ineligible), we will write to the bank, explain why we think we should consider it, and we will ask for their agreement.

The BBRS looks at the option of the concessionary case process in all negative Eligibility Assessments.

As of 31 December 2021 the BBRS had referred 19 cases to the banks for the concessionary case process. Of these, six cases were taken forward and seven did not progress. The remainder were still under consideration.

There have so far been eleven Determinations, including a range of outcomes.

The BBRS will only report on closed cases in terms of outcomes. As of 31 December 2021 seven cases had closed. Of these one was upheld in full, five were partially upheld and one was not upheld.

The BBRS recognises that there may still be some situations in which either a customer or the bank they are complaining about feel there is more to be considered about the case and wish to appeal the whole or part of a Determination. It is also possible to appeal an eligibility decision made at any stage in the process.

This number is higher than the organisation anticipates experiencing in the future. Many cases were originally registered before the Scheme Rules were agreed and published, and the BBRS went live.

The BBRS is beginning to see evidence in its data of positive changes as a result of initiatives that have been put in place, including a streamlined registration process, and the Customer Marketing and Awareness Campaign.

The BBRS continues to see cases registering for the service, with a more balanced split between historical and contemporary cases. This should continue into 2022, particularly as external factors come into play, such as the repayment of Coronavirus Business Interruption Loans (CBILs).

Not reflected in the figures in this report is the number of cases going through mediation as a means of resolving disputes. Since its launch, the BBRS has seen levels of trust in mediation from both banks and customers increasing. At present, two cases have left the adjudication process and are currently going through mediation. The BBRS hopes to report more on this method of alternative dispute resolution (ADR) in future reports.