The BBRS was established to help Small and Medium sized business Enterprises (SMEs) who have not previously had access to other forms of dispute resolution.

The BBRS allows eligible businesses the opportunity to have their complaints heard and independently reviewed.

The organisation’s key goal remains to fairly resolve disputes between businesses and banks; and to promote trust in business banking relationships. The BBRS has been working towards this goal by adjudicating cases impartially, based on what is fair and reasonable, using alternative dispute resolutions (ADR) practices but also facilitating non-adjudicated outcomes (i.e., settlements, mediation, conciliation).

This is the sixth Quarterly Insights Report, providing information about the BBRS’ casework data between our launch on 15 February 2021 through to 30 September 2022.

Customers continue to be at the heart of what we do, and the BBRS remains focused on delivering an excellent customer experience. We are leaving no stone unturned in trying to reach eligible customers prior to the closure of our Historical Scheme to new registrations on 14 February 2023.

Of the cases that cannot be classed as either contemporary or historic, a portion will remain unestablished due to insufficient information being received before the case was withdrawn by the customer or was deregistered by the BBRS, due to prolonged customer inaction. For any open cases, the BBRS will continue to gather information so these cases can be classed as either historic or contemporary.

When the BBRS launched in February 2021, the number of cases was heavily weighted towards the historical scheme. This was due to the existing awareness of the BBRS among SME groups that were involved in the set-up of the BBRS. Since then, the number of historical cases has fallen slightly.

Currently historical cases make up a high portion of all registered cases, but this is as expected whilst the BBRS runs an awareness campaign to encourage complainants under the historical scheme before this scheme closes to new complaints on 14 February 2023.

*Percentage figures may not add up to 100 due to the effects of rounding.

Of the 862 cases that had come to the BBRS, 634 were closed for reasons not related to eligibility. This could have included, for example, the removal of duplicate cases, customers withdrawing their complaint from the process or the deregistration of a case by the BBRS due to prolonged customer inaction.

Deregistered cases had not been the subject of a formal Eligibility Assessment, and these customers can re-register their complaint in the future if they wish to do so (for cases under the Historical Scheme the deadline for registration is 14 February 2023, when this Scheme will close). Cases were only de-registered following sustained and unsuccessful efforts to communicate with the customer.

As at 30 September 2022, nine cases were waiting to be allocated to a Customer Champion. These cases had either just registered on our website or were in the very early assembly stages and so customers were being helped by a Case Officer.

The BBRS continues to actively work with customers on progressing cases as quickly and efficiently as possible.

The BBRS treats all cases as eligible until it establishes the facts relating to each complaint. When a complaint is first assembled, relevant information is collected to check eligibility. Where there is a clear early challenge or lack of clarity, the customer is made aware as soon as possible.

As of 30 June 2022, of the open cases, 100 were progressing as being eligible for the BBRS compared to 17 cases that had been assessed as ineligible, although this number could decrease, subject to appeal. Of the closed cases, 111 were found to be ineligible.

The eligibility of every case is kept under review throughout the entire complaint journey – as a result most cases fall into the ‘open cases progressing as eligible’ category until they require an Eligibility Assessment or receive a Provisional Determination.

The most common reason for ineligibility remains that a case is currently, or was previously, eligible for – or received an outcome from – the Financial Ombudsman Service.

The second most common reason was that at the time the case was referred to the bank, the business did not to meet the required BBRS financial criteria.

There can be one or more reasons affecting eligibility per case. As of 30 September 2022, 44% of the 125 ineligible cases had more than one reason making them ineligible for consideration under the Scheme Rules. 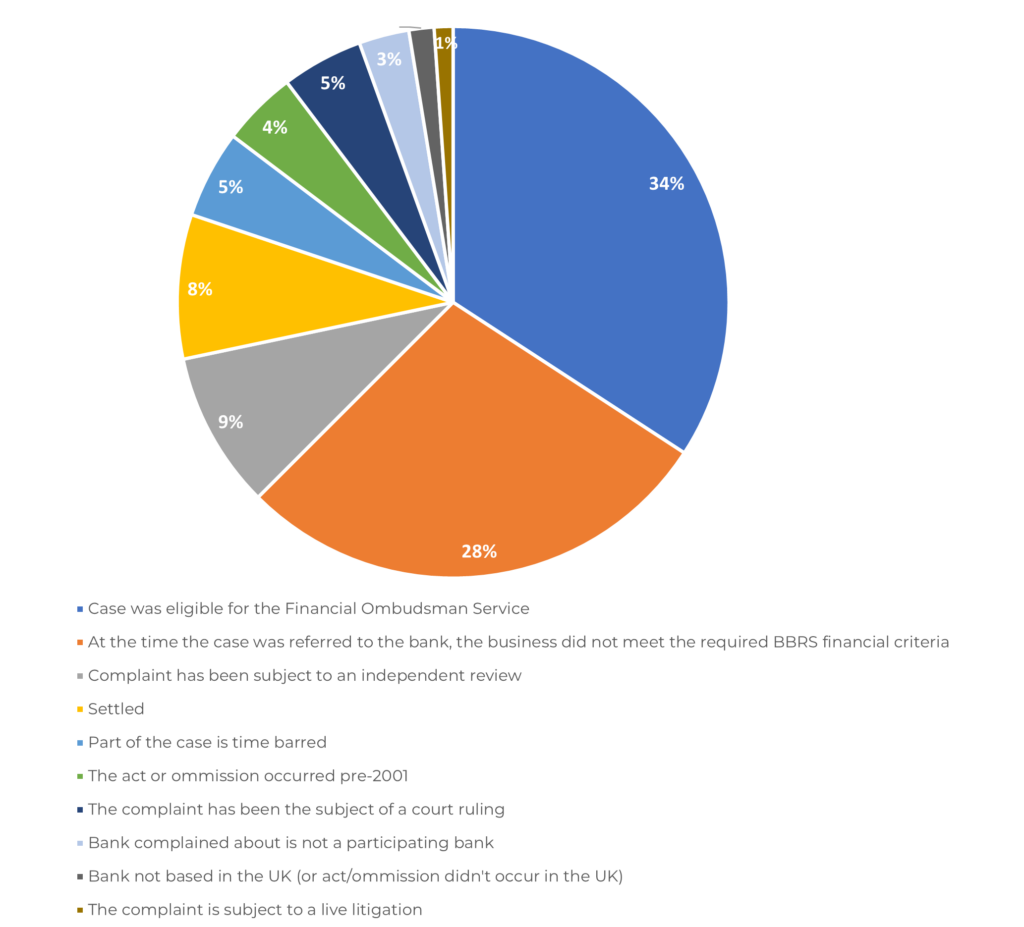 As of 30 September 2022, the BBRS referred 33 cases to banks for concessionary consideration. Of these, seven cases were taken forward and 19 were not progressed with the BBRS, although some of these were taken on by the banks directly and settled following BBRS involvement. Seven cases put forward for concessionary consideration were awaiting a response from the bank.

The BBRS recognises that there may be some situations when either party feels there is more to be considered about the case and wish to appeal part of, or the whole, Eligibility Assessment, after it is issued.

Of the 63 appeal notices that have been received so far:

The BBRS only reports on closed cases in terms of outcomes. A case is not considered closed until the period for any appeal has passed or there is no further action required. As at 30 September 2022, 26 cases had closed. Of these three were upheld in full, 16 were partially upheld (some parts of the case were upheld, whilst other parts were not) and seven were not upheld. In comparison, as at 30 June 2022 16 cases had closed with two upheld in full, 12 partially upheld and two which were not upheld.

The number of contemporary cases being registered with the BBRS has increased but historical cases continue to make up a large portion of all cases. This is expected to continue into the remainder of 2022 and early 2023, with the historical scheme expecting to close in February 2023.

Not reflected in the figures in this report is the number of cases going through alternative means of resolving disputes. Since its launch, the BBRS has seen levels of trust in non-adjudicative dispute resolution from both banks and customers increasing with both parties more willing to take part in mediation, conciliation, and settlement.

As at 30 September 2022, 27 cases had moved from the adjudication process and into non-adjudicative ADR – this has increased from 21 cases as at 30 June 2022. These cases had either received a settlement offer from the responding bank, were in conciliated settlement, or were taking part in mediation.

The BBRS has continued to see a steady increase in both adjudicated and non-adjudicated outcomes and will continue to work towards getting customers a fair and reasonable resolution in as many cases as possible.